The Norwegian Rituals of Meeting and Greeting

Tor is a popular guy - he meets many people every day; family, friends, colleagues and complete strangers. And he has just the right greeting for each and every one of them. 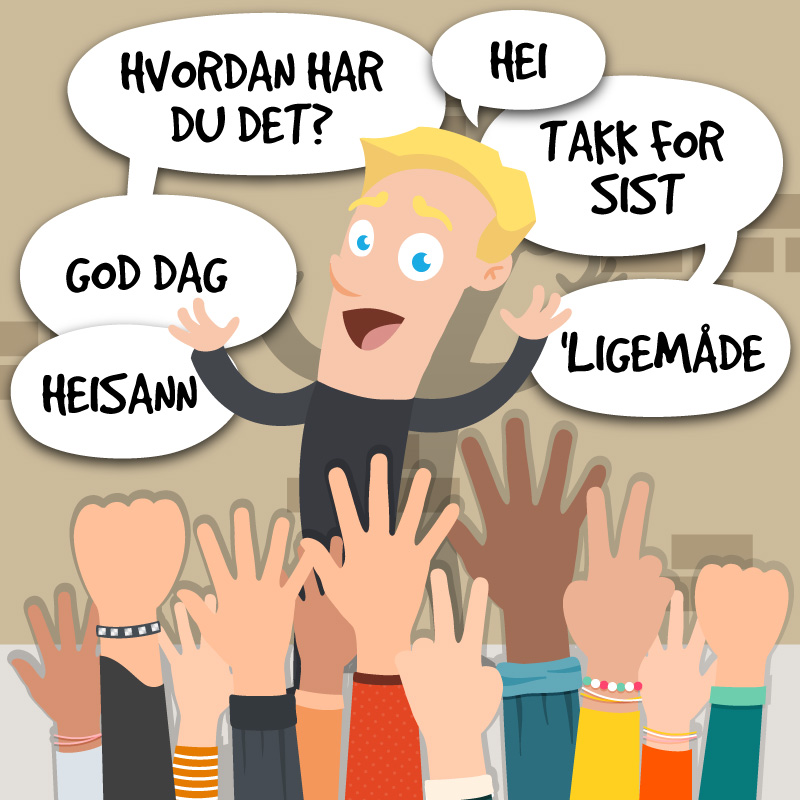 Here's how you exchange greetings with the Norwegians:

Depending on the time of day Tor says:

God aften (most people only use it jokingly - like 'good evening' in a posh, British voice)

So you're feeling pretty confident with these basic initial greetings.

But do you know what to say when someone greets you? Can you always follow the flow of the common Norwegian greeting “rituals”?

It’s a bit like dancing; know the steps and you'll survive on the dance floor!

Let Tor help you get past the common mistakes. Read on and become an expert meeter and greeter in less than 5 minutes!

Use har or går

When Norwegians greet each other, certain phrases always go together. When I say X, you’re supposed to answer Y. And some phrases really don’t match up, so beware.

Let’s say you meet Tor in the street. He says (with literal translations):

You then answer with one of these phrases:

You must use the same verb “har”.

You would then answer:

Again, you must use the same verb as Tor did.

DON’T mix up har and går if you choose one of the the full sentence options! You must use the same verb as Tor picked, he sets the stage and you have to follow.

I'm bored with just “bra” or “fint”. What if I want to be a little more adventurous? Could I use one of these?

Sure, that might work great, but you should know that "ganske bra" translates to so-so, quite good, somewhat good or even pretty good.   There is a chance this phrase could sound too tepid or too specific. It depends on your level of honesty that day.

Translates to really good or amazing. It's pretty emphatic, so you may not want to be using it all the time. As you know, Norwegians tend to be more moderate or neutral.

Does not mean "giant good" - but “kjempe” does mean giant. It is used more often as a compliment to someone who has done really well. Like "Fantastic! Well done!". It might sound a little over-enthusiastic, cheeky or even childish in response to “How are you?”

Many Norwegian learners try to translate directly from English. That rarely works. Here are some terrible examples: DON’T say:

“How are you?” does NOT translate directly into Norwegian. This is the kind of in-depth question you could get in a job interview, not in everyday greetings. DON’T say:

“I am fine” does NOT translate well from English into Norwegian. You might be good looking and know it, but it is not generally accepted to say it out loud.

Now go out and meet some people - you know exactly what to say to them!

Check out the Part 2 of Norwegian rituals of meetings and greetings, and the other articles here before you go.